Archive of the Historic Towns Forum - please visit www.htvf.org for our latest news and events 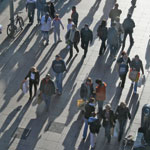 The state of the streetscape has risen up the agendas of politicians and practitioners. After many years of projects and campaigns, together with other organisation, HTF continues to pursue this topic looking at traffic management and the public realm with connectivity. This not only enhances the historic built environment, but there is a growing body of evidence to support the value - in economic, social and environmental terms - of investment in the public realm which contributes to regeneration and sustainability.

Exploring Shared Space:
Warwickshire County Council explored more radical traffic management solutions for some of its historic towns and the Shared Space model was one which was presented, by its advocate Ben Hamilton-Baillie, at a seminar on 18 November 2009 hosted by Arup, the consultant working with the Authority.

The 'Manual for Streets' (DfT 2007) which replaces DB32 will make a significant impact on this area (HTF comments). In 2008 the Forum published its answer to this publication - advocating much wider application of the principles - Manual for Historic Streets (2008). This very rapidly sold out of hard copies and is now available as a pdf on cd.

Following a workshop held in January 2007, the conference in July 2007 in Leicester - Streetscape in Historic Towns - the theory and the implementation- looked at the ambitious City Centre Public Realm Strategy in place there, looking at all aspects of the City regeneration through coordinated improvements to the public realm.

Focus on the Public Realm (2003) also addresses issues related to the streetscape.

Articles from HTF e-news and previous editions of NEWS which relate to this topic can be seen here.

HTF supports the work of: